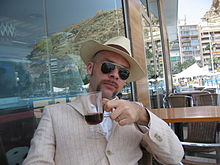 Jono El Grande is an autodidactic Norwegian composer, band leader, guitarist and conductor. He cites as his major sources of influence Captain Beefheart, ’60s Frank Zappa, King Crimson, Igor Stravinsky and Art Rock.[1] Jono El Grande claims that his extreme mixture of genres and timbres is a result of his musical vision: moving away from the traditional concept of ‘music as a result of social processes’.[2]

Although Jono El Grande is enjoying modest growth on the European avant-garde scene,[3] he is most well known in his own country for his eccentric and amusing performance art/dada-inspired live shows. In 2000 he formed The Jono El Grande Orchestra, renamed Jono El Grande & The Luxury Band in 2005.

Jono El Grande has released five albums, Utopian Dances (Krusedull Prod. – 1999), Fevergreens (Rune Grammofon – 2003),[4] Neo Dada (Rune Grammofon – 2009),[5] «Phantom Stimulance» (Rune Grammofon – 2010) and The Choko King (Rune Arkiv – 2011) in addition to contribute with compositions on other projects (both Rune Grammofonsanniversary albums Money Will Ruin Everything 1[6] & 2” and on Wire Tapper #21”, the avant-garde music magazineThe Wire’s 21st edition of their CD series). Jono El Grande served as festival composer for Happy Days 2007, presented by Ny Musikk, the Norwegian section of ISCM – International Society For Contemporary Music. He also became a member of Norwegian Society Of Composers fall 2010.[7] He played at the Zappanale #22 (August 2011) and world premiered a new orchestral piece for the Bergen located sinfonietta orchestra BIT20 Ensemble December 2011.[8] In 2014 he wrote and released the classical piece «Til Anbjørg» (For Anbjorg) for his late wife. In November 2014 he world premiered a new piece for Trondheim Sinfonietta at Rockheim, Trondheim.[9]

Jon Andreas Håtun was born at Bærum Hospital, Norway. At the age of ten, far before he touched his first instrument, he began inventing various band concepts without the intent for performance.[10] In 1988 he bought his first guitar, and in 1989 he formed his first actual band along with three school buddies – a teen-age punk rock combo called Mannes Fatales.[11] They would perform stunt poetry in combination with pre-arranged electric noises. Jono El Grande served as the lead vocalist and lyricist. Mannes Fatales performed three concerts before disbanding in 1990. In the years 1990 – 1992, Jono El Grande assembled a series concept bands intended for one-night performances and recordings and/or rehearsings only: The Terror Duo, Black Satan, The Pez Dispensers, Acetaded Beat, As Droserain addition to a handful of school bands formed to mark end-of-term celebrations and similar occasions.[12]

From 1991 – 92 Jono El Grande worked as a radio host at the local station Radio Express.[13] Two hours every Sunday for about a year, he played pure Frank Zappa- and art rock-related music. He also guest-hosted the progressive rock radio spot Uhørt in its very infancy. As of 2008, the show still airs on Norway’s FM 99,3. After graduating from high school in 1992, Jono El Grande attended art school in Bergen.[14] In 1994 – 95, Jono El Grande worked as assistant decorator atNorsk Film, building props for the movie Pakten (movie)[15] (Waiting For Sunset) with Robert Mitchum. Eventually, in 1995, he quit the job to become a full-time composer.

In 1995 Jono El Grande formed his first group called Menü Bizarra, which performed only three concerts before it was disbanded later the same year.[16] This band led to the performance art group Menü Tizz Aura, which performed dada shows in Oslo on on both theatrical scenes as well as television shows.[17] He then formed the group Grande Corpse, which never performed live. Grande Corpse played only at a few rehearsals in 1996, a project related to the never performed opera A Gangrene Hangover.[18] He also formed The Gringo Quartet, which held one show only at Volapük Cultural Forum in 1997.[19] After this he formed Vidunderlige Vidda, also called Vidda, with one of the members from Menü Tizz Aura in 1997, Stein Stölen Bjerkaker. Vidda reached some local success the following years.[20]After disbanding Vidda late in 1998, Jono El Grande performed solo with electronic works. He then released music from the whole period 1995 – 1999 on his debut album Utopian Dances in December 1999.[21]